The Volvo Bertone Years – History 200-series Made by Volvo

The book that, according to the writer, didn’t seem to come to an end is on the table in front of you. The content of more than 500 pages probably justifies the time it takes to make this book. Beautiful coffee table book that originated in 1998, when writer Paul van Vugt first got in touch with Volvo designer Jan Wilsgaard. The designer of style icons like the Amazon, the 100- and 200-series, the 700-series and the founder of among others the 262 C earned according to Van Vugt a podium of honour for his contribution to Volvo’s heritage.

The book describes the history of the first limousines Volvo produced, concept cars, the creation of the 200 series with in particular the 260 series and the resulting exclusive models such as the 264 TE, 262 GL and 262 C, of which the last two came from Bertone. The book also contains chapters with special types, brochures and miniatures, larded with a wealth of previously unpublished visual material.

The Volvo Bertone Years – History 200 series Made by Volvo is in addition to a tribute to Jan Wilsgaard also dedicated to the reader, who has the same passion as the author of this book. This result has been achieved with the help of other Volvo enthusiasts. 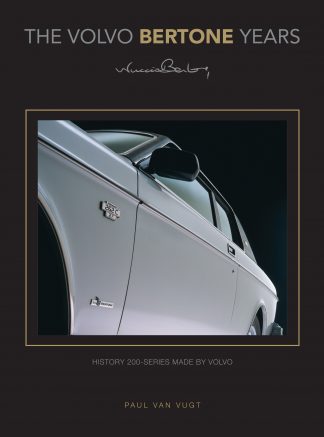